The serial "Chernobyl" and the excursions to exclusion zone 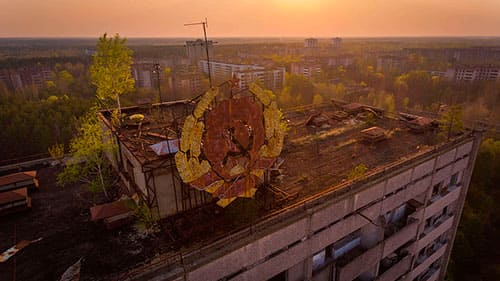 When the serial film "Chernobyl" was released lots of foreigners and Ukrainians desired to see the location of the most terrible catastrophe on the planet. The serial was shot in such an authentic way that lots of tourists were interested to see all these subjects in reality. It's significant that tourists try to plan the route to see as many locations shown in the serial as possible. It's not a big deal for touragents to make up routes in such a way because the project shown on TV is quite realistic.

Trip to Chernobyl with significant locations from the serial

The exclusion zone unites 30 kilometres territory with atomic station, cities Chernobyl and Pripyat. The last one city is the most interesting for tourists because there were the main episodes of the serial. This very trip from Kiev to Chernobyl includes documents check-up at the control-pass office Dityatki. Only tourists with an official permission have an opportunity to cross the border. When they get ready for the trip, the touragent takes all these deals himself, and tourists just come to explore this territory.

After settling some formalities the tourist enter the USSR era. Time in Pripyat' stopped 30 years ago when people were working on communistic system building. Americans in the serial could certainly convey the atmosphere of that period, and city locations helped a lot. All the popular routes along Pripyat' are made up according to these peculiarities. Everyone who watched the serial visit such places of interest as:

Every location is covered with gloomy and a bit scary energetics. Theme park with a ferris wheel and racing cars, half-ruined club and cinema in the serial are full of people, but in reality they are empty, without laugh and any positive emotions. From the firefighters' 30 years ago lots of people rushed to save the atomic station and the citizens. Almost all of them were taken to hospital in Pripyat' and then were transported to Kiev and Moscow for serious curation. Almost all 5-floor many-flated houses were half-ruined. Nowadays all these buildings look quite sorrowful, but in the serial they were native for almost 50 thousand people live in Soviet Pripyat'.